Well, we had a rather small crew but that was my fault for not planning farther in advance. Bill Tuck and John Voght had visited in 2013 to perform pipe repair only to discover that a wind storm had rearranged the tanks.   Needless to say, the pipe repair was unnecessary. We had wished for Fish and Wildlife to execute on the helicopter contract for census and repair work 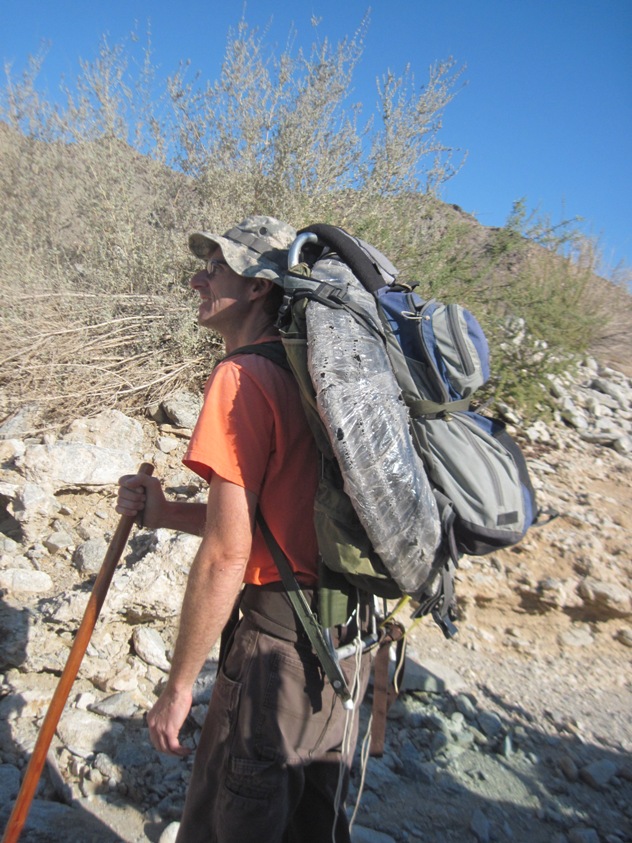 so that we could perform major repair and upgrade the system to SCBS Raincatcher system but the contract has not been executed. After months of delays we decided to attempt a minor repair without helicopter support. Debbie and I were originally planning to visit Dr Lutz to make a survey and plan of attack but after spending several hours studying photos, I decided that we probably had enough information to attempt a repair. I put out the message through email. John Roy prompted responding offering to pick up any necessary supplies. I spent some time sharing photos and discussing plans. John made a special trip to Camp Cady and Osborne Supply to get the necessary pieces. We had most everything we thought we needed, including a spare valve and tank flange (they were the only parts not visible in the photos). Perhaps overplanned, at least in our own minds. What is that saying about 7 P’s?

Debbie and I arrived at the camp site Thursday afternoon after spending time at 29 Palms Marine Corp base inspecting the Bullion and Cleghorn Guzzlers. We found Bill Tuck and John and Linda Roy at camp and nearly set up – they didn’t beat us by much. We had a leisurely evening parceling out the supplies and discussing the plan of attack around the camp fire. Friday Morning John Voght showed up to help us out. We thought Zac Mullin was also going to attend but left without him – he was delayed in his plans and didn’t show up until Saturday – see other story.

Bill hopped in John’s FJ Cruiser, Debbie and I 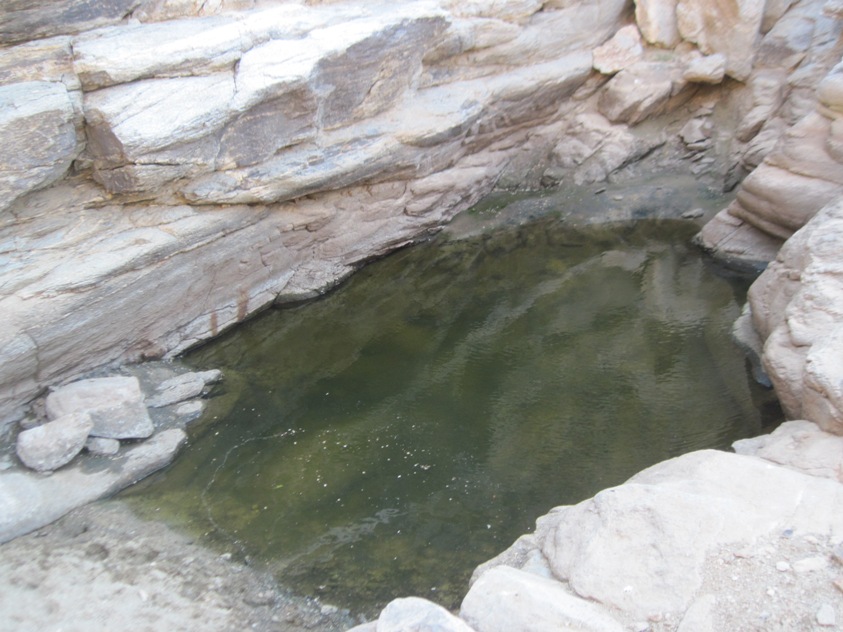 hopped in the CJ and we headed up the trail promptly at 8 am. John and Linda stayed in camp to patrol, peruse an interesting magazine collection and rendezvous with a volunteer that planned to arrive Friday afternoon.

At the end of navigable trail, we donned our backpacks and started hiking. Steve had the 50 foot roll of 1 inch spa pipe, Debbie had two 24 inch pipe wrenches (thankfully with aluminum handles), Bill Tuck had the four steel construction stakes for anchors and John had the valve, flange, fittings and the rest of the tools and equipment. If you haven’t been to the Dr. Lutz system it is a fantastic trail. Starts out rather benign in the bottom of the wash passing between creosotes and catclaws

but when the canyon narrows the trail starts to climb. The bottom of the wash is populated with large boulders and soon you have to pick your poison– rock crawling hand over hand in the wash bottom or sidehill on loose gravel. At the top of the canyon, there are at least two narrow ledges to navigate over and around the tinajas. Both were filled with water – I estimated about 3 or 4 thousand gallons each and maybe 5 feet deep – no place for an accidental cliff jump but perfect for bighorn sheep. We found the remains of a young ram between the tinajas – not sure why he died but it’s not unusual to find bones near a water source. Maybe he was ambushed, maybe just sick or tired the body was too far decomposed to make any determination. We were happy to find the tinajas full, this volume of water should support 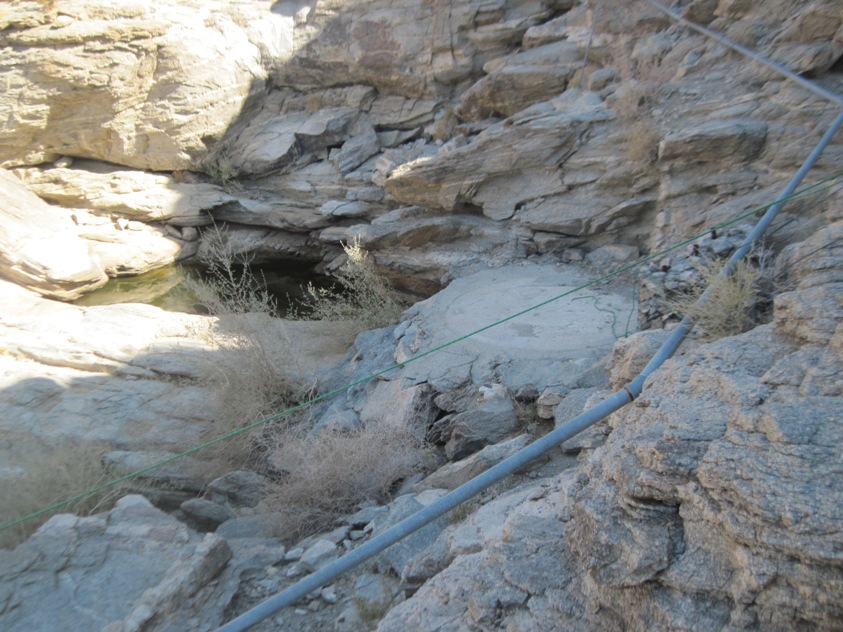 the sheep for several months if not more. Last visit the tinajas were full of sand so last summer’s rains must have flushed them out.

We found the tank right where Bill and John had left it 2 years ago – one the pad and sideways. It had been suggested by our premier site selection expert, Glenn Sudmeier, that we move the tank to the old pad. By moving the tank to the old pad we could reserve the newer double tank pad which has enough room to fit a Raincatcher tank at some future date. This was no small task – the only feasible paths were over a 4 foot boulder and across a narrow shelf (too narrow) or down 6 feet around the boulder and then back up 6 or 8 feet to the old pad. We had a quick democratic discussion 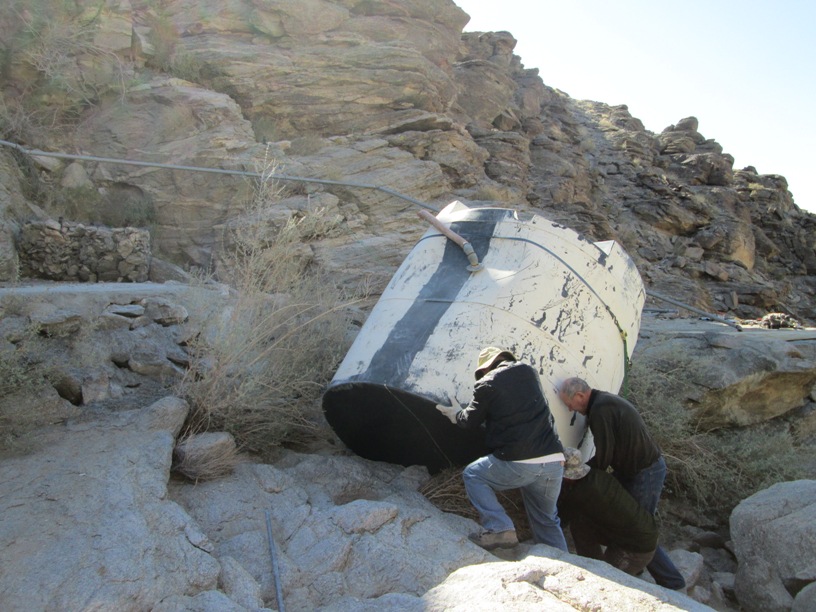 followed by an executive decision – I elected to go down and around as I guessed that if we tried the other path the tank would end up ‘down there’ anyway without our choice or orientation. We rigged up some rope and anchored the tank as we proceeded to tip it over some rocks and up onto the original tank pad. Other then knocking John off the pad, and nearly pinching Bill between the rock and the tank it was rather uneventful.

Now down to real business – plumbing the tank. We had found the tank valve intact and undamaged – I even tried the threads and they seemed OK. After placing the tank I second guessed the integrity of the valve and decided to replaced it since we had carried a new one. That’s 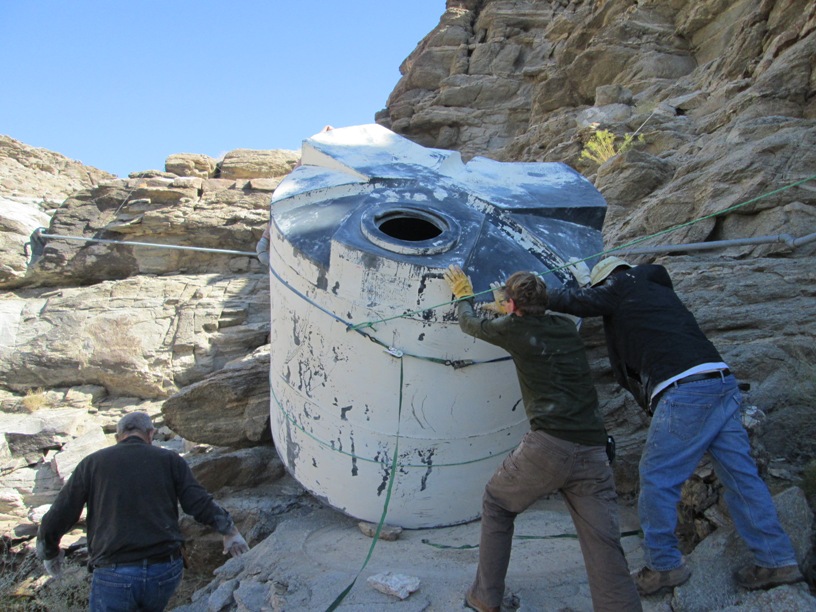 when I flattened the valve without breaking the threads loose. Apparently the valve crushes easily when there isn’t a fitting inside. I couldn’t get any more torque for fear of ruining the flange. Bill spent a few minutes carefully hacksawing off the old valve without going through the flange nipple. We were fortunate that the original tank pad was directly under the collection pipe. All we had to do was get the fittings loose. Old 2 inch galvanized fittings don’t loosen easily. After cutting the pipe (no unions and rotating the 40 foot assembly we out of the question) we applied the 24 inch pipe wrench – nothing doing. Cheater bar to the rescue! We used a 7 foot piece of 2 inch pipe – that did the job but what a job. Just lifting that pipe and miscellaneous fittings was a chore, it must have weighed 40 pounds or more. We were going to 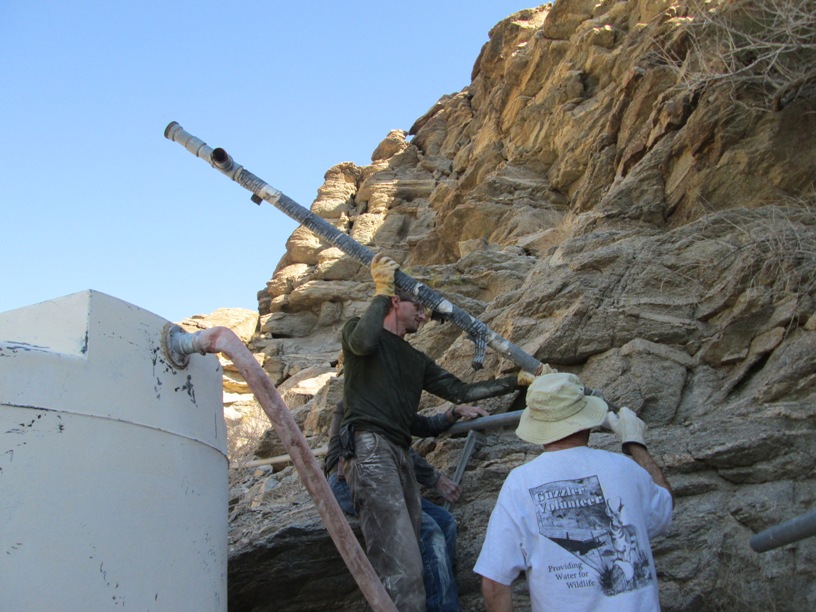 pop that fitting or break the wrench. Well 1000 ft lbs on the fitting did the trick and it came loose without a even a squeak.

We managed to saw a small hole in the top of the tank for the collection pipe, plumb the drinker with the spa pipe and anchor the tank with some 1/8 cable. Luckily the original installation had used the gas powered Cobra rock drill to bore holes for 1.5 inch pipe anchors – we didn’t need to find any cracks to pound the stakes into.

We stayed at the project site until nearly 3 pm. We knew we were pushing the limits of daylight for this season but none of us wanted to hike back up to finish the job. As long as we could get back to the trucks before dark we were good. Turns out that we all safely got down the mountain, Bill discovered 2 different ram’s horns and we arrived at the trucks at sunset. We motored back to camp arriving in full darkness. John and Linda Roy were just about to send out the search party for us when they saw the headlights.

Andres Reutman had arrived and the 7 of us enjoyed a relaxing night around the firepit. Another successful repair completed. We broke camp Saturday morning, John and Linda headed back to Cady to return the tools and the rest of us headed over towards Weavernoy to do a “leisurely” inspection.  I’ll save that for another article.